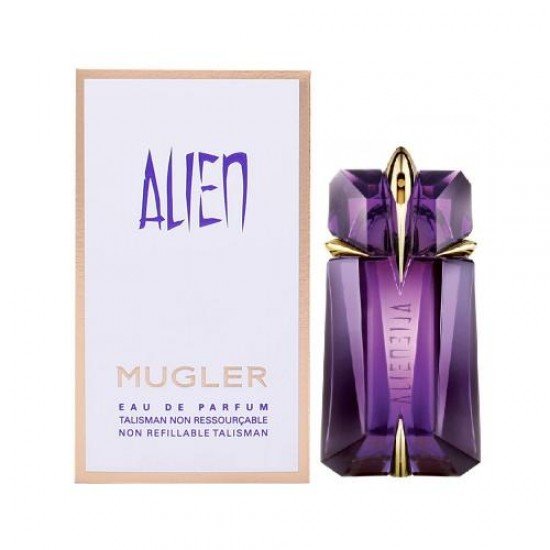 ‘Alien’ was first launched by Thierry Mugler in 2005, it was eventually discontinued and a new form of the Alien version called- Alien Fusion in 2019, was launched. Where ‘Angel’ is rather sensual and sophisticated, ‘Alien’ on the other hand is sexy and unconventional. Alien is sweet and floral and something which every girl should try at least once. It is an oriental fragrance which means it’s richly scented and indeed stays for long hours (Alien Mugler).
Thierry Mugler has always shown excellence when it comes to reinterpreting their original fragrances. Quite frequently the house launches a new form of its originals and makes us awestruck. With every new launch, the brand adds a sense of rejuvenation and greater proximity to the contemporary ways.

Top Notes- Ginger, Cinnamon
Middle Notes-Tuberose, Orange Blossom
Base Notes- Vanilla, White Amber
Alien Fusion is the most flamboyant take on Alien yet while the original Alien was rather a glamorous take. The beautiful red bottle is reminiscent of the hot and fiery sun. The bottle is no doubt gorgeous and is like a décor piece for the dressing room. Its original flacon concept is basically a talisman stone that is rather intensifying, alluring, extraordinary and mythical.
Alien Fusion has a unique playfulness to it, it starts with a powdery scent along with a tinge of spice and soon mellows into a floral powdery fragrance. Finally, you will get to know the exact fragrance after a while which is exotic floral with spices and vanilla in the background. This new version of Alien is lighter as compared to the original but it still comes on the list as an oriental scent (Alien Mugler).

How Long does the new Alien Mugler Stay?

It certainly stays for a whole long day, especially if I spray it on the small and hidden portions of my body. The person next to you will indeed be in awe of you and will feel mesmerised by its strong yet feminine fragrance (Alien Mugler).

Alien Fusion is feminine, sweet, light and floral but it has a certain uniqueness to it in the background, you get kicks of different spices that indeed resembles power and expression. It adds a sense of individuality and freedom thereby making it a progressive scent. It’s sexy, eccentric, bold and powerful which is something that defines a modern, cosmopolitan woman.